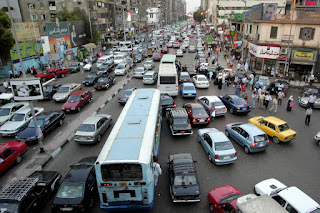 Egyptian Streets: "In his book, Understanding Cairo: The Logic of a City Out of Control (AUC Press, 2010), urban planner David Sims points out that, although only 14 percent of the capital’s population owns private cars, these vehicles are the major contributors to traffic congestion.

“The private car accounts for roughly two-thirds of all vehicles on the streets of the Greater Cairo region, with the remainder being made up of different kinds of buses, taxis, trucks, government vehicles and motorcycles,” writes Sims."
at 9:13 AM